A letter in the IW Observer led to a day sharing memories of an eventful night almost 80 years ago for Bill Major and Gracie Stowe.

Bill, who now lives in Badminton, Glos., was born on the Island but moved to the mainland after his East Cowes home was bombed. We published a letter from him (IW Observer, June 25) asking if any readers remembered the night of May 4, 1942, as he’d like to visit the Island and meet up with them.

The Major family lived in Minerva Road. Then aged six, Bill remembers hiding under the stairs with his mother as the bombs rained down. His father was at the seafront serving as a Home Guard volunteer. After the first wave of bombers passed, Bill and his mother moved to a shelter nearby, with Bob grabbing his prized anti-aircraft gun Dinky toy to take with him, determined the Germans wouldn’t get their hands on it. It was a good job they did, as the second wave of bombs destroyed their home along with several other houses. The next morning Bill and his parents left the Island to go and live with relatives on the mainland, taking only the clothes they were wearing, the Dinky toy and the only thing that could be salvaged from their former home, a Wilton carpet. 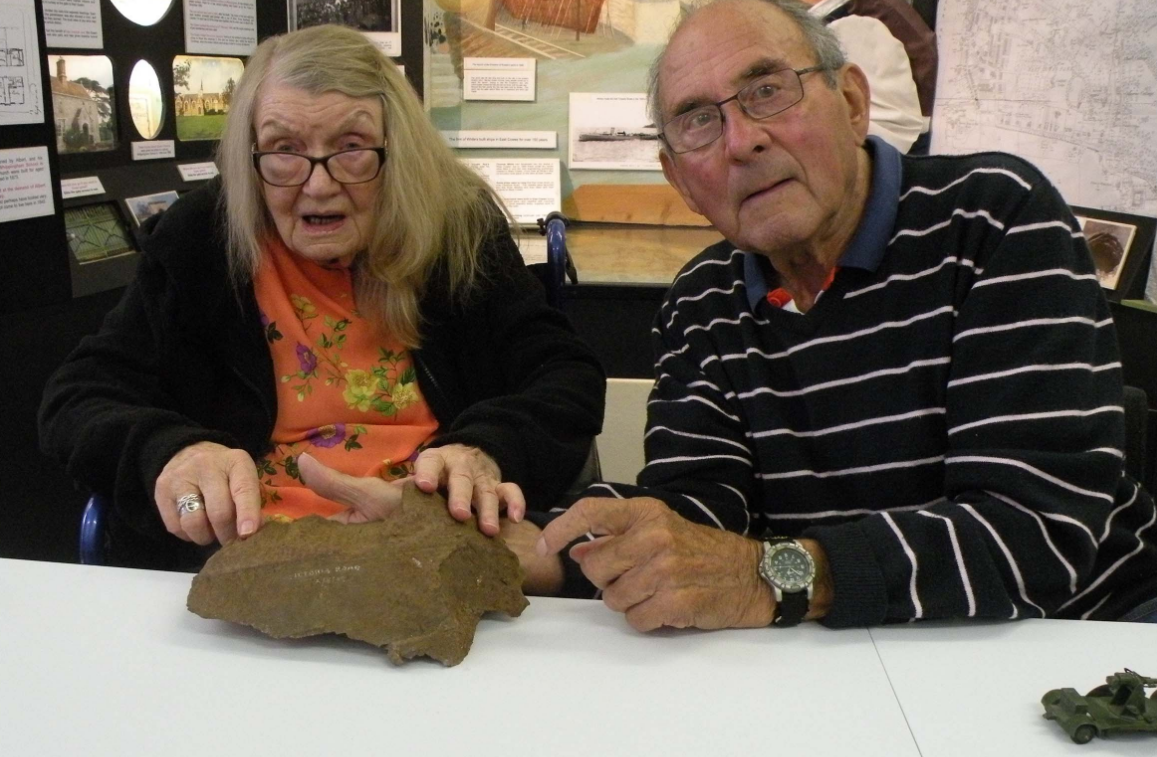 Bill’s letter touched a chord with Gracie, who was eight in 1942. She lived on Clarence Road and she vividly remembered the night when she too hid under the stairs, with her sister and parents, during the air raid. The family sought shelter next door when their house was also hit by a bomb. They then had to move to Newport.

We put Bill and Gracie in touch and they met recently in East Cowes Heritage Centre, at the invitation of local historian Ken Wheeler, where they shared their memories of a night that changed both their lives.
Afterwards the group went to Minerva Road and found the site of Bill’s childhood home, now rebuilt. He knocked on the door and spoke at length to the present owner who kindly showed him the garden, which he remembered from the time. They also went to Gracie’s Clarence Road house and on to the cemetery to pay their respects at the civilian war grave.

At the time the Polish Grom-class destroyer, the ORP Blyskawica, was in J S White’s shipyard undergoing a refit. According to Admiralty regulations she was supposed to be disarmed but her commander, Captain Wojciech Francki, had kept up her ammunition supplies. When the Luftwaffe arrived on that fateful night, her crew lit smoke canisters to obscure Cowes and East Cowes from their attackers and then used her large-calibre guns to force the German planes to fly higher, so that they lost accuracy as they dropped their bombs. Many bombs fell far from their targets, and although 70 people died that night, many hundreds were saved by the bravery of Captain Francki and his crew.
Bill said: “I’m so pleased I wrote to the IW Observer. I thought it was a bit of a long shot that I’d find somebody who remembered that night almost 80 years ago, but it worked. It was lovely meeting Gracie and sharing our memories. Talking to her brought other things to mind, such as my earliest school memory which was having to carry our gas masks all the time, as we were told the Germans could gas us at any moment.

“Ken also knew a great deal about what went on from a historical perspective and recorded our memories. He showed us the street directory of 1934. It shows my parents’ names and registration. At that time you had to have an identity card and I could just make out the writing of my father.
“After our talk we had a lovely lunch and we even went to see our old garden, so I’d like to thank the owner of the house built where my former home used to stand. It was a very special day for me.
“Next year is the 80th anniversary of the defence of Cowes and East Cowes by the ORP Blyskawica. I’m planning to return to the Island for the commemorations. I’m really looking forward to it.”