That’s according to Lucy Bell, centre facilitator at the Women On the Wight (WOW) project, run by Island charity WightDash.

The new exhibition, which opened on Saturday, showcases a collection of work from the various groups who meet at WOW’s Lower St James’ Street premises in Newport. Many of the groups are creative, taking part in sewing, fabric craft, poetry, art and knit and natter. There’s also a make do and mend group, where older people with skills can pass them on to younger women. Some of the women at WOW have survived domestic abuse, adverse childhood experiences or are recovering from addiction, others face disability or mobility problems or suffer from loneliness and isolation, but all of them have used this opportunity to tell the world something about themselves. 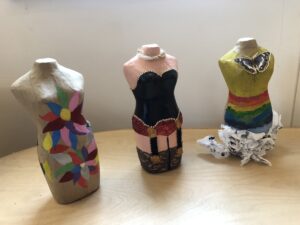 Working over a number of weeks, they’ve been introduced to art techniques and skills they wouldn’t ordinarily have encountered, including papier mache, collage, printing and modelling in 3D.

Lucy said: “Everybody has done their own thing, and used their individuality and their own stories to produce this art. We’ve worked through what they want to say about themselves and what messages they want to get out for other people to hear.

“It is massively important to get their stories out there. Seeing their work up on a wall for others to see is a powerful thing. These women don’t have a big voice and are often not heard, and things are harder for them.

“I’m a big believer in using art to tell the world about yourself.”

The exhibition runs until March 9 and free to view. It is open from Tuesday to Saturday from 10am to 3pm.