The leaseholders of Brown’s Family Golf and Cafe are being threatened with court action for switching off their own electricity to a car parking firm’s cameras which were giving out wrongful tickets.

Smart Parking Ltd were asked by Geoff and Kate Scandrett to help with problems last summer with people parking on their Sandown premises. However, far from helping their business as promised, the firm started issuing hundreds of wrongful tickets to its customers, causing untold misery and upset.

The couple took on an 18-month lease last year to reopen the much-loved Sandown venue and have transformed the business, which now hosts party nights and live music. However, Geoff realised people were using the venue as free parking and then spending the day on the beach.

He said: “Last July, I signed a contract with Smart Parking Ltd who were made aware of some people over summer using our car park, but were not our customers, and offered a solution by way of cameras, and iPads in our building for the customers to enter their details.

“Myself, staff and suppliers would be exempt by way of a ‘white list’ (including also other tenants on-site).

“I also gained permission from my landlord, the IW Council, who have been completely supportive. The council understood the need to look after my customers. It was also reiterated by the council at the time that the 22-acre site could be used by dog walkers when we were closed and they could not be affected.

“After two weeks from going live, the phone started ringing from customers who had come to Brown’s for golf or tea and cake and were ticketed, although they had entered their details. 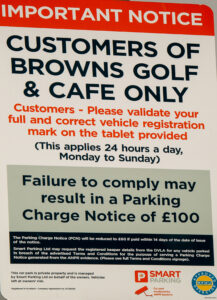 “We aren’t that big so we quickly started realising that genuine customers were being ticketed even though staff or themselves were entering their details into the iPad. At first, I thought people were putting them in wrong, but after all the staff, many customers and then myself experiencing the same thing it became clear that this was not the case.

“I emailed my concerns thinking we had a teething problem or a fault. They emailed back in agreement and said they would deal with it. I had also emailed the staff plates and mine and updated this as required.

“Unfortunately, it spiralled out of control during August, September and October where they have managed to ticket hundreds of genuine customers during this time. Not twenty or thirty – but hundreds of my customers. They have also ticketed all my staff, suppliers, and even myself a few times. The majority of my customers are seniors who have been coming to Brown’s from all over England for many years.

“Eventually, I turned off my own electricity which supplies the power for the cameras so the tickets would stop. But I am now being taken to court for their loss of earnings!

“They have caused so much pain to hundreds of vulnerable elderly people and I can prove this. They won’t answer my emails and calls and people who don’t pay the fines are also being threatened with court action.

“I am prepared to go bankrupt over this issue to support the people who have been wrongly ticketed. I would also like to point out that we, at Brown’s, have not made a penny from this. It was just set up to protect our business.”

An Isle of Wight Council spokesman said: “This is a contract agreed between our tenant and the parking company, and therefore outside our responsibility and control.

“We are doing what we can to support our tenant so that these issues can be resolved as swiftly as possible. The council has contacted the company concerned on behalf of the tenant. The company advised that there had been some operational issues which they were going to address with our tenant.”

A British Parking Association spokesman confirmed yesterday that an investigation had been launched but was unable to comment as it was ongoing. She said: “In the meantime, if a motorist has received a parking ticket that they believe was issued in error they should appeal to the operator in the first instance.

“The more tangible evidence supplied, the more persuasive the motorist’s case. If it is rejected the operator will provide details of the independent appeals service, POPLA, which provides independent redress for motorists, and is free to use. We also have an advice website www.knowyourparkingrights.org where you can find more information about the appeals process and what to expect.”

The IW Observer has contacted Smart Parking Ltd for comment.