A free exhibition which celebrates the work of Father Paul Bellot, the architect of Quarr Abbey, is being held there until March 1 between 10am-4pm daily.

Father Bellot (1876-1944) was a French Benedictine monk who was born in Paris. As the son of an architect, he was destined to become an architect himself, and in 1900 he graduated at the Paris School of Arts.

However, after a short architectural career he decided to become a monk and joined the Benedictines of Solemnes in their exile on the Isle of Wight. As a monk with architectural skills, he was soon asked to design the new Quarr Abbey as well as a new abbey in Oosterhout, the Netherlands. 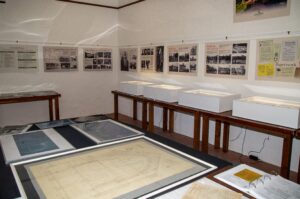 The new monastery at Quarr was built in three stages. First of all, in the years 1907-1908, the refectory, library, chapter house and living accommodation for the monks were built around three sides of the cloister. Then, in 1911-1912 the abbey church was raised, to the south east. Finally, the guesthouse and parlours were built, along with the south side of the cloister in 1913-1914.

The monk-architect chose to work with cheap, imported Belgian bricks throughout. And he showed himself a pioneer in breaking away from contemporary French practice which preferred to hide the brick beneath stone and plaster.

Fr Bellot showed that it was possible to build on a monumental scale with brick alone, and he achieved a sense of massive solemnity, which appeared modern at the time, and has since been called a brilliant example of 20th Century expressionism in architecture.

He later designed churches in France, Belgium, Canada and Portugal. Most of these are built largely of concrete or brick which were his preferred materials.

Get someone who cares for our countryside recognised