Council leader, Lora Peacey-Wilcox last night made a full statement about the furore surrounding a photograph taken from her private Facebook page and sent to local media.

The picture was posted on November 5 last year and shows the council leader’s two dogs. In the background is a display cabinet, containing a collection of barely-visible golly dolls. A number of councillors, including council chairman Geoff Brodie and Tory group leader Cllr Joe Robertson called for the leader’s resignation, claiming that members of minority ethnic groups would be offended.

Cllr Peacey-Wilcox has now disclosed that it was an old picture and the dolls have not been in her home ‘for years’.

This was backed up by a statement by Tory councillor John Nicolson, sent an email to other councillors confirming that he had visited the leader’s house ‘quite often over the years’ and had never seen any dolls that could be described as ‘racially offensive’. He added: “I have known Lora for many years and never had cause to view her as a racist in any form, quite the opposite. In recent weeks, as a friend and her Ward Councillor, I have been concerned for her mental wellbeing and have expressed those concerns to senior officers and to my political group.”

At the most recent full council meeting the leader said she had been issued with a personal attack alarm by the police, who issued a statement confirming that they were looking into a reported ‘Hate Incident’. 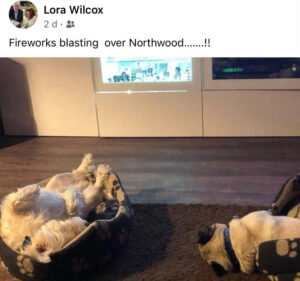 Media interest remained local until Sunday, when an article appeared in the on-line version of the Daily Mail, about the ‘racism row’ on the Isle of Wight. It disclosed that Cllr Brodie had received ‘one letter and two emails’ about the issue from un-named Island residents ‘who all said they were offended by the dolls and that [the situation] had the potential to bring the Isle of Wight Council into disrepute’.

However, it appears that readers of Mail Online, more diverse than on the Island, overwhelmingly feel that councillors calling for her resignation have overplayed their hand. The most popular comment was: ‘Oh! For the love of God, just stop all this seeking things out to be offended about and focus on the more important topics affecting the World right now.’ By Thursday afternoon it had received just over 9,500 votes, 98 per cent of them supportive.

The IW Observer was contacted about the photograph last November, but considered that it was a private matter and publishing the story would breach the standards code of our regulator, IMPRESS.

Mail on-line readers have had their say, but what do you think.
Let us know at iwobserver.co.uk/polls

The principles I live by have always extended to my professional life; even more so during my time as a councillor. I have always taken pride in being understanding, empathetic, patient, courteous and professional. I am truly sorry if this issue has caused people to feel otherwise.

I loathe racism and other forms of discrimination from the pit of my stomach. People who know me personally know the range of ethnicities, disabilities and other diversities in my close family. Those who have attacked me so publicly, seeking political advantage, have not at any time considered any ethnicity issues that may affect me. It was clearly never my intention to offend anybody and to this day, I have received no genuine communications from anyone saying they were offended.

The image was taken a long time ago; the dolls are not in my home and haven’t been for years. It was re-posted in November in a private Facebook message about the impact of fireworks on pets. However, political opponents got hold of it and doctored it and a sensationalised story appeared locally two weeks ago, and this week in the national press.

From the outset I feared this would be used to incite racial hatred and launch personal attacks on me and those I love. Sadly, this proved to be correct. I was advised that anything I might say could be misrepresented and so I said nothing. Some people think that was the wrong decision, but like you, I am human and don’t always get everything right.

Ironically, I have had to involve the police, due to harassment and personal attacks by those who fed their version of the story to the media. The police have supplied me with a personal alarm to carry at all times. I am grateful to them.

Those who have persecuted me publicly have done so for their own ends, pursuing political ambitions or personal motives. They have been determined to publicise the issue as widely as possible, desperately seeking to damage me.

They have shown absolutely no care about my mental or physical wellbeing, or that of my family. My family’s right to respect for our private lives has been ignored.

Other than two hate-filled emails passed to the police, I have been overwhelmed by the understanding, support and love Islanders have shown me. Over 600 have contacted me, many imploring me not to resign. I will never forget their kindness and compassion and I will not let them down.

It is my belief that we must be mindful of world issues, and those closer to home. Using mutual respect and understanding as the backbone to achieving the aims of this Council, I am getting on with the job I was elected to do for the betterment of the Island.

I will be making no further comment about this issue.

Get someone who cares for our countryside recognised

Green Fingers with Darren Everest: Planting out your young plants