Following a recent exchange of correspondence in the IW Observer, I have been invited to contribute to ‘Vectis View’. For this I am grateful. I have worked for the majority of my career on the Wight in public health but, now retired, I am free to comment. Covid-19 has been a huge public health challenge and has highlighted diverse approaches by different countries ranging from denial to tight control in some Asian countries. Democracies are accountable to their electors.

The science-based equivalent for effective public health is open publication of data/trials that is subject to review/criticism. Last December, in the Proceedings of the National Academy of Science of the USA, Howard and co-workers published ‘An evidence review of face masks against Covid-19’ that is broadly supportive of masks in higher risk settings. The paper has been widely cited in the scientific literature and is publicly available to read on-line. Adam Webb’s analogies (IW Observer letters, July 30) to ‘wind through a football net’ and grains of sand and rocks are amusing, but mislead. The physics of masks is very well understood, especially from an occupational health perspective, but their use by the public, where some will be home made, and even high specification purchased masks may be incorrectly worn, is less well researched. The evidence base continues to grow – but is very unlikely to conclude ‘Masks are worse than useless’ (IW Observer letters, July 30). With respect, this opinion comes from an anti-regulation stance, and not from a review of the evidence. For good reason, the ferries have decided to continue to encourage the use of masks and they are still mandatory in Scotland and Wales. 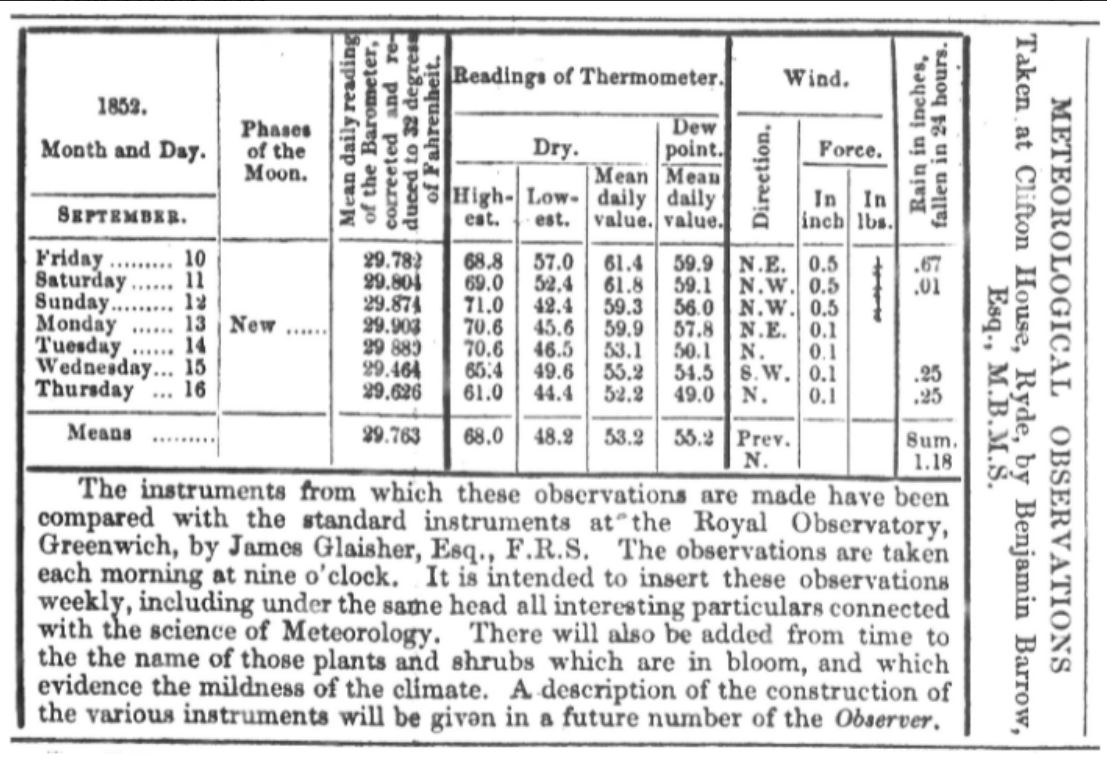 Public health practitioners have had a long-standing interest in the climate and a recent issue of the IW Observer led with the headline ‘Flash Floods. Highest rainfall since records began’. The third issue of the first IW Observer (September 4, 1852) carried a weather report supplied by Benjamin Barrow. In those days, a weather report was highly regarded and the following February a correspondent lamented that there was no report for Ventnor, ‘It could not have otherwise than a favourable effect upon the interest of the town’.

The first issue of the new IW Observer (August 10, 2018) carried an article ‘Hottest Summer since 1976!’, featuring the recording undertaken in Shanklin for the Met Office by Clive Cooper. Clive’s recording of the rainfall for 2021 already shows record results. There was almost no rain (1.3 mm) in April, whereas the June total was three times the average. The daily and monthly totals, however, conceal detail of local flash flooding on the Island, which is projected to become more common in all areas.

Leaving aside the important issue of the human contribution to climate change, the updated UK climate projection published on July 22, 2021, predicts for the UK ‘warmer, wetter winters and hotter, drier summers along with an increased frequency and intensity of extreme (weather events)’. This projection needs to influence the design and location of new housing, the construction of flood defences, as well as provision for vulnerable individuals. Building on help given during Covid, we all need to continue to be good neighbours.

In my opinion, public health should be data led, based on published scientific evidence, and (if it’s where the evidence leads) advisors should be unafraid to tell politicians what they don’t want to hear. In some circumstances (e.g. no smoking in public places), regulation can be for the greater good, but needs political leadership and the consent of the electorate.