There could be millions of pounds worth of unclaimed property left by people who died on the Isle of Wight without making a will over the last 30 years. A government list includes 16 people whose place of death is listed as the Island, and with an estimated average value of over £218,000 per estate, that’s almost £3.5 million which could be claimed by families, even distant relatives, before it passes to the government.

The list of unclaimed estates currently includes almost 8,000 entries for England and Wales, the majority being for bachelors, spinsters or widows. The list is updated every working day and an estate remains on the list for 30 years after the date of death, once removed it is not possible for anyone to make a claim against it.

Under the rules of intestacy which apply if there is no will, only blood relatives of the deceased are eligible to make a claim. Step children are not entitled to claim and neither are partners who are unmarried or not in a civil partnership, regardless of how long they have been together.

If someone believes they are entitled to inherit from an unlisted estate, they should contact the Bona Vacantia (vacant goods) Division (BVD) of the Government’s legal department. They will need to send a family tree showing how they are related to the person who has died, including dates of all births, marriages and deaths. If BVD think there may be a valid claim they will ask for supporting evidence such as birth and marriage certificates, formal identification and a detailed explanation of any discrepancies.

A whole industry has built up around ‘heir hunting’, but although the process can be long-winded, essentially all you need to do is prove your identity and your relationship to the deceased.

Time is running out for anybody who thinks they may have a claim on Mary Roche’s estate who died on the Island in 1990, the earliest Island death on the register. On the other hand there are 29 years left to establish your right to the estate of David Mann who died in Shanklin in September last year.

You can see the full list of unclaimed estates at gov.uk/government/statistical-data-sets/unclaimed-estates-list#the-list 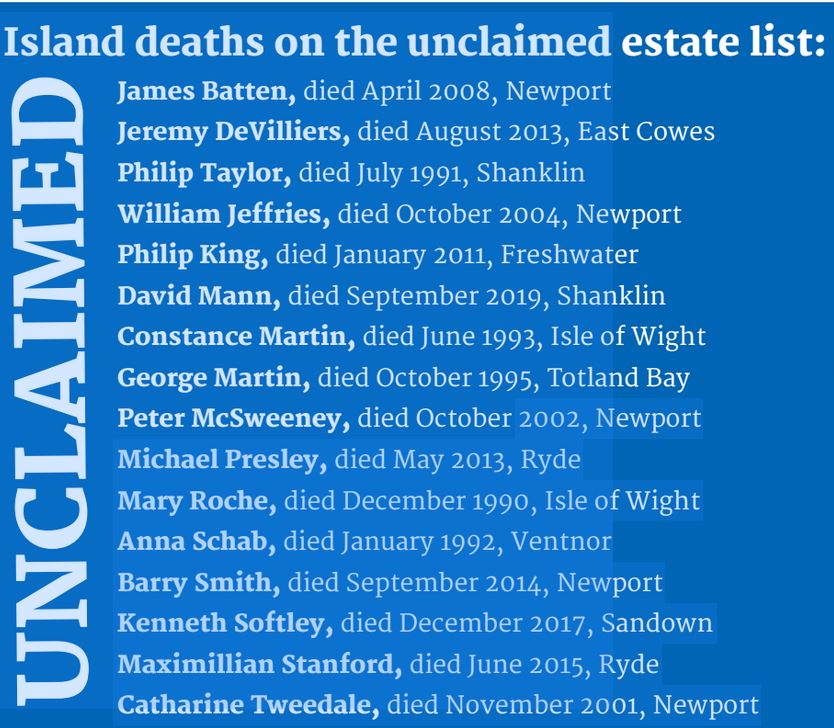