A Cranmore couple celebrated their golden wedding anniversary last week, despite a ‘white lie’ during the marriage proposal.

Ian and Tess Perrier were born and grew up in Jersey and they started going out together when Ian’s sister dated his pal. Tess said: “He was always around the house and my sister asked me if I would mind going out with him. Anyway, we started dating and, when he came round to proposing to me, he said: ‘Do you know how to cook poached eggs?’

“I replied: ‘Yes, of course,’ although I didn’t – but I learned pretty quickly!”

On leaving school, Ian, 70, became an electrician while Tess, 67, was a retail assistant.

They honeymooned in Alderney and, as the only transport was an Islander aircraft, they had to stand on giant platform scales so the weight could be balanced on the plane. They couldn’t be guaranteed to sit together although they eventually did. 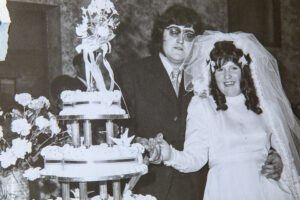 Ian went from being a qualified electrician into Jersey Post Office, where he worked his way from postman to head of operations. The Post Office was his job for 39 years. One of his roles was to manage the logistics for the large amounts of packets sent from Jersey when there was a VAT advantage.

Tess had various retail positions and finished as an assistant manager at the Co-op, as well as raising their two boys and running the home.

The couple moved from Jersey to Isle of Wight in 2010. Ian said: “The Island is just how Jersey used to be, but it is now so built up. I had been over here showing my birds quite a few times and started looking for somewhere.

“I wasn’t really happy in my job and only had a year until retirement, so we found this place and I commuted to Jersey each week for the best part of a year. We just fell in love with the area. Living in Cranmore, we are amazed by the wildlife we see every day.”

Ian’s hobbies include boat fishing and he had many boats whilst in Jersey; he also has bred, shown and judged Border Canaries for nearly 50 years. He is also a qualified judge and has judged events as far away as Ireland, Italy, USA and in many areas of the UK.

Tess’s hobbies have included breeding, showing and judging rabbits, her favourites being Netherland Dwarfs. She is also very keen on craft work and is a good water-colour painter. Nowadays her main hobbies are her two polytunnels and cooking.

They have two sons, Nathan (45), an accomplished drummer who lives in Sussex and is married to Ana, with two children, Nicko and Rosalie, and Daniel (41), a special-needs co-ordinator manager, married to Dani, with children, Holly-Hope and Rowan. He still lives in Jersey.

The couple celebrated their day with family and friends at the Bugle Coaching Inn, Yarmouth.