Maisie the miniature schnauzer has a head for heights and an even better sense of teatime, and she’s been making sure her owner Darcy Muncer stops for a break as he repairs the thatch on St Agnes Church in Freshwater.

Maisie, who is three, has been going up ladders with Darcy since she was just eight weeks old. She loves life aloft, settling quickly in her basket on the scaffold wrapped up cosily in an old fleece, she naps right through until 9.55am, when she makes sure Darcy knows it’s time for a cuppa for him and labourer Trevor – and a bowl of biscuits for her!

Darcy has been thatching for 30 years, having started his apprenticeship in 1990 and has been a Master Thatcher for 20 years. He loves his job, and the company of Maisie makes life even better, he describes her as ‘the apple of my eye – we’re inseparable’. 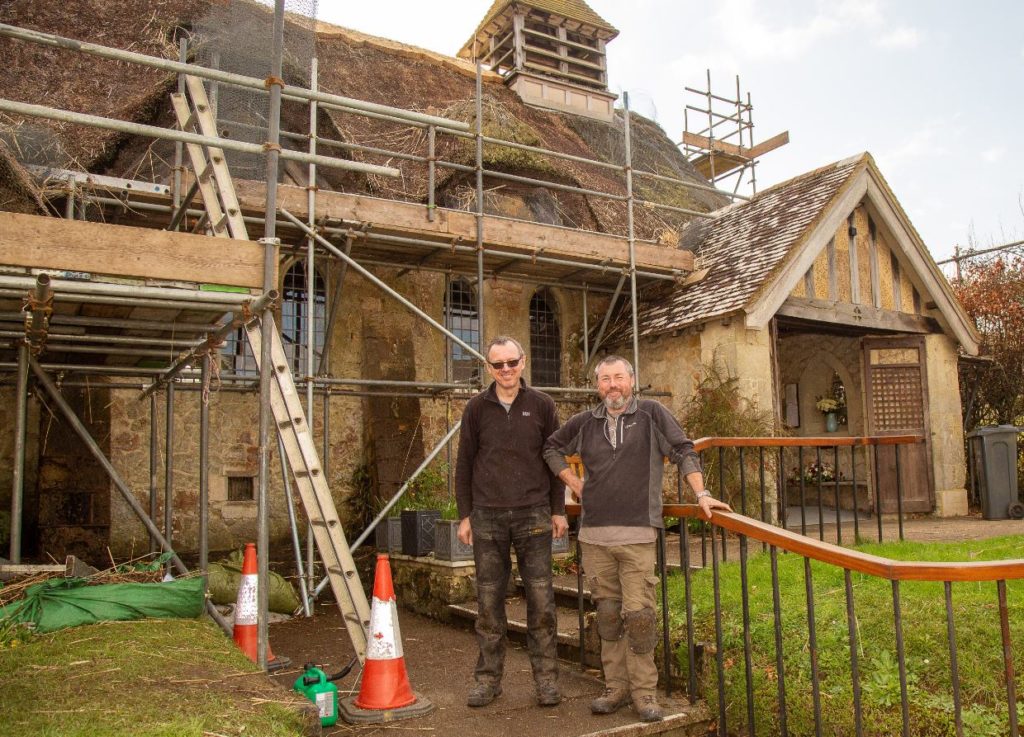 Darcy said: “In the mornings Maisie gets ready for her harness and waits eagerly at the door to go to work. She’s never shown any nervousness about being up high and when I’m working she’s usually in her bed up on the scaffold, although if the weather is really bad she stays warm and snug in the van.”

The recent storms have led to some older thatched roofs looking a little worse for wear and Darcy says he has had as many calls in the last five or six weeks as he had in the previous nine months – about a year’s worth of work.

The beautiful and peaceful St Agnes Church was built in 1908 on land donated by Hallam the eldest son of Alfred, Lord Tennyson. Hallam spent his early childhood and the last 20 or so years of his life at Farringford House in Freshwater Bay. It is the only thatched church on the Island and their next fundraising project is for extensive repairs to the original wooden floor.