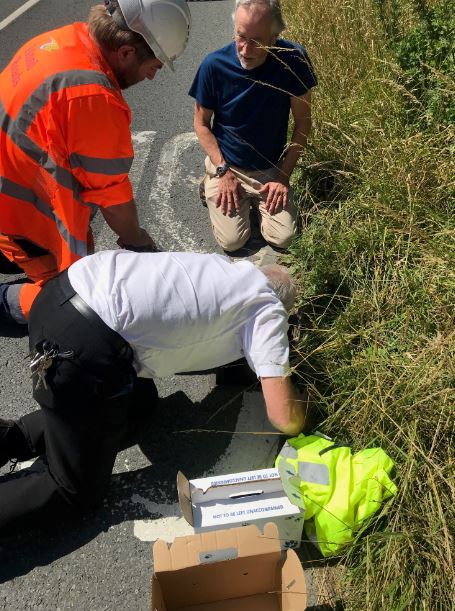 A brood of ducklings who were rescued after being trapped down a drain at the side of a busy road are now being given the care they need at the RSPCA’s animal rescue centre at Godshill.

Island Roads teamed up with the RSPCA and Friends of the Animals to rescue four ducklings after the birds fell into the drain system near the Sun Inn on Calbourne Road on the Isle of Wight.

Island Roads duty operatives John Corby and Sean Hillman were called to the scene and swiftly removed the drain cover allowing the ducklings to be released. They were taken away to be cared for at the RSPCA’s Godshill Animal Centre at Bohemia Corner.

Isle of Wight RSPCA branch manager Suzanne Pugh said the birds were being kept warm and fed and would most likely be in the care of centre staff for about eight weeks.

She said: “As soon as they are fully-feathered and able to perform basic duck survival skills like swimming and flying, they will be released back into the wild but that takes time.

“At the moment they need help with all the things that Mum would normally do – like keeping warm and finding food.

“The key is to give them that help while making sure they retain their wild instincts so they can be released into the wild again as soon as they are ready.

“We would like to thank Island Roads and all those involved in the rescue. We assume the ducklings became separated from their mum as they crossed the busy road.

“When you see people pulling together in support of wildlife in this fashion it really is a wonderful thing.”

John added: “We can only assume that one by one they fell into the drain through the grate. The mother was nowhere to be seen. It is a busy road so it was a lucky escape for them. It was one of the more unusual jobs for us but we were glad to help out.”

In most cases, lone ducklings will be fine, as the mother is usually close by and will likely return. If after two hours she hasn’t returned, anyone who finds lone duckling is advised to carefully collect, wearing suitable gloves, and place it into a secure ventilated cardboard box, lined with towel or newspaper (do not offer food or water). Keep the bird somewhere warm and quiet and take it to your nearest wildlife rehabilitator as soon as possible.

Make sure you handle the duckling as little as possible and keep any dogs well away. It’s important to keep them wild so minimise human contact.

If you can see a dead adult bird nearby, only monitor the duckling for an hour before contacting the RSPCA.

Though best known for looking after unwanted domestic pets and for its Bohemia Boarding lodging for cats and dogs while owners are away, the RSPCA centre at Godshill, which is run by the Isle of Wight Branch of the animal welfare charity, also has dedicated facilities to care for all sorts of wild animals and during the past year has cared for more than 300 wild animals before release back into the wild.

Despite disruption to fundraising during the coronavirus crisis, the team still needs support to help to continue to care for animals in desperate need.

There’s still lots of ways you can help the RSPCA Isle of Wight branch, including donating an item from the Amazon wish list, signing up as a volunteer, or even by sharing details of animals looking for homes from the website on social media.