Four cyclists have ridden nearly 1,000 miles from Orkney to the Island to raise money for Mountbatten Hospice and KissyPuppy. 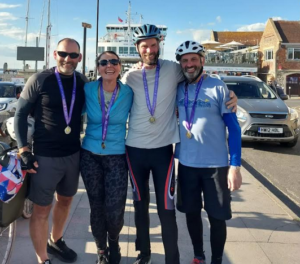 Andy (who, along with Karen and Jason, are from Freshwater) said: “Initially, Karen wanted to do something challenging to celebrate her 40th birthday this month and I’m retiring then as well, so we eventually decided on this bit of madness.

“Generally, people cycle from Land’s End to John O’Groats for one of these challenges, but we decided that logistically, due to work pressures, we had to do something which took around 18 days.

“We were driven up to Orkney where we were dropped off and my other brother, John, shadowed us in his van, which carried all our supplies and camping gear, on the journey back home.

“In the end, some days were a real slog, especially travelling back down through Scotland. Each day was different and it was a question of just getting through the bad weather with the thought of a nice pint at the end of the day!

“The rain was driving down and soaked us through to our skins. We had our camping gear, but there were nights where we stayed at a cheap hotel or somewhere we could get dried properly and wash our clothes.

“We geed each other up along the way to keep our spirits up. A few years ago, I had a bout of pneumonia and I also had a bit of a chest infection on the ride, so I struggled a bit going up hills; I was called ‘Puffing Billy’.

“Looking back, there are a lot of great memories and it was so good to spend such a lot of quality time with Mick and Karen, sometimes life is so busy you don’t get time to do that.”