Shanklin man Dennis Murphie became inquisitive when he was given an old jar found in a well in the garden of a Lake home. With an interest in the history behind old objects and where they come from, Dennis researched the words ‘E&T Pink London’ which were engraved on the jar. He discovered it was almost certainly made in a factory in South London, probably in the 1800s, but by a strange quirk of fate it also has a strong Island connection.

In Merstone, Fiona Pink is at the helm of Pinks, a small operation which makes jars of chutneys, chilli jellies, pestos and peanut butters, with all her produce on sale at a number of Island outlets including Farmer Jack’s at Arreton.

Fiona’s great great grandfather Edward Pink founded E & T Pink’s in the 1880s in Bermondsey, South London, which was later taken forward by his son Thomas, to become one of the most successful and dominant quality food producers of the Victorian and Edwardian times. 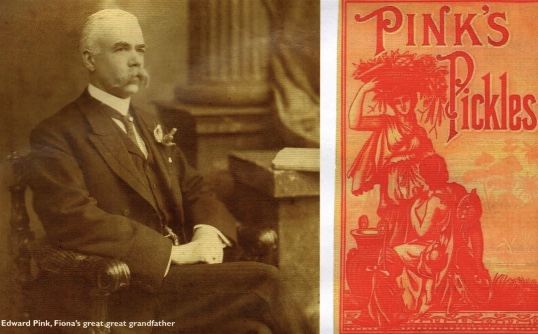 Dennis said: “I used to go what I call ‘bottling’ on the island when, at low tide I would go down to a specific place on where I knew I would find old bottles and pottery. As it was very muddy I would have a large pole with a nail on the end which I used to lean out and hook the bottles.

“I collected quite a few over time and kept a lot of them. The person who found the jar in Lake knew I did this and offered it to me for my interest and collection. Before the lock down I was hoping to contact Fiona Pink and offer to reunite her with the artefact. I thought she might appreciate this piece of family history.”

When the IW Observer contacted Fiona on Dennis’ behalf, she said: “This is a wonderful find and very kind to offer it to me. I look forward to meeting up with Dennis after the lockdown, as I only have two and not in such lovely condition.”