Michael Albert Terrance Lawrence, who was widely known as Scooby for being built like the great dane in Scooby Doo, and for his love of scuba diving off Freshwater Bay, has died suddenly, aged 67.

Scooby was best remembered for an incident involving the actor, Benedict Cumberbatch, who has a property on the Island. Scooby was knocked off his bicycle by the actor’s car one day and he responded by slapping Mr Cumberbatch when he got out of his car. The incident made national newspaper headlines with a friend of Scooby’s saying he was lucky he didn’t punch him!

Scooby was born in the Changi RAF Hospital, Singapore, and arrived on the Island in 1957, with his parents Larry and Sheila. 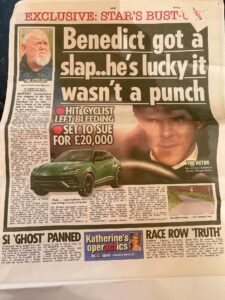 The family moved to Freshwater Bay in 1967 to live at Sheila’s mother’s house in Blackbridge Road. Scooby didn’t like school and, when he left, started building and fishing with other skippers until he could afford his own boat. He had many boats until he built ‘My Jade’ but she was damaged beyond repair in a storm, so he built another boat ‘Get This’.

He was a founder member of Freshwater Independent Lifeboat at Freshwater Bay, fishing in the summer and building in the winter.

His favourite drinking establishment was the former Starks Hotel in Freshwater Bay. It was a lively place with regular fights involving Scooby. However once the evening was over, the next day the locals would go back and repair and rebuild any damage!

Good, bad or indifferent, if he loved you he was always on your side, true and honest and loved by many, he was very artistic. He loved pottery and carving and could turn a piece of wood into a piece of art.
Scooby leaves big brother Tony (aka Swimmer) and children, Jade, Paige, Courtney and George.