Farmer Jack’s popular farm shop has been rehomed and renamed and is now housed in its new custom-built, expanded premises just down the road in Arreton.

Harvey Brown’s is home to a new food hall, butchers, deli and licensed cafe built on the Brown-family land, overlooking the lakes at Hale Manor Farm.

Farmer Jack’s, based at Arreton Barns, was originally run by the Browns and Pearces, but following retirement, the Browns have expanded and relocated the project to massive premises on their own land. The Brown family have been farming the land for four generations, with David and Mandy running the business along with their children, Sam, Ben and Jemma, and their spouses. 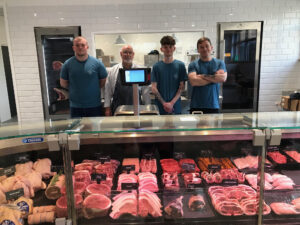 Jenny Brown, married to Sam, said: “Our ethos will be the same; everything we sell will be local, where possible.

“Over the years, the family went off doing their own thing, but are now united with this project.

“Farming is a difficult industry and we needed to diversify and we all had a special skill set to get this up and running. It is a huge risk because Farmer Jack’s was such a successful business, but we wanted to make something bigger and better and we think people have an appetite for bigger places.

“We want our locals to continue coming here, but we also feel that this is a destination and will be good for Island tourism.

“Very shortly, we will be building a bridge which will connect the land to the cycle path across the railway which will benefit cyclists and walkers with beautiful walks down to the lakes.

“We also have a mezzanine, which, when finished, can host parties and business events. This is our family business and we hope people will enjoy it as much as we do.”