This weekend marks what should have been The Isle of Wight Festival 2020, when festival goers were due to stand arm in arm in Seaclose Park, experiencing that special island atmosphere.

Whilst we’re celebrating some of the festival’s greatest moments from home this year on Sky Arts and Absolute Radio, organisers are delighted to announce the line-up for next year’s event, taking place from 17th to 20th June 2021.

John Giddings, of The Isle of Wight Festival, said: We should be watching some fantastic performances in a field together this weekend, but sadly it was not to be. We’re thrilled that we will welcome most of the artists booked for 2020, plus a few special additions, to next year’s festival. We’re excited to get planning and will work within advised guidelines to ensure the safety of the audience, artists and staff on site – come on down!! 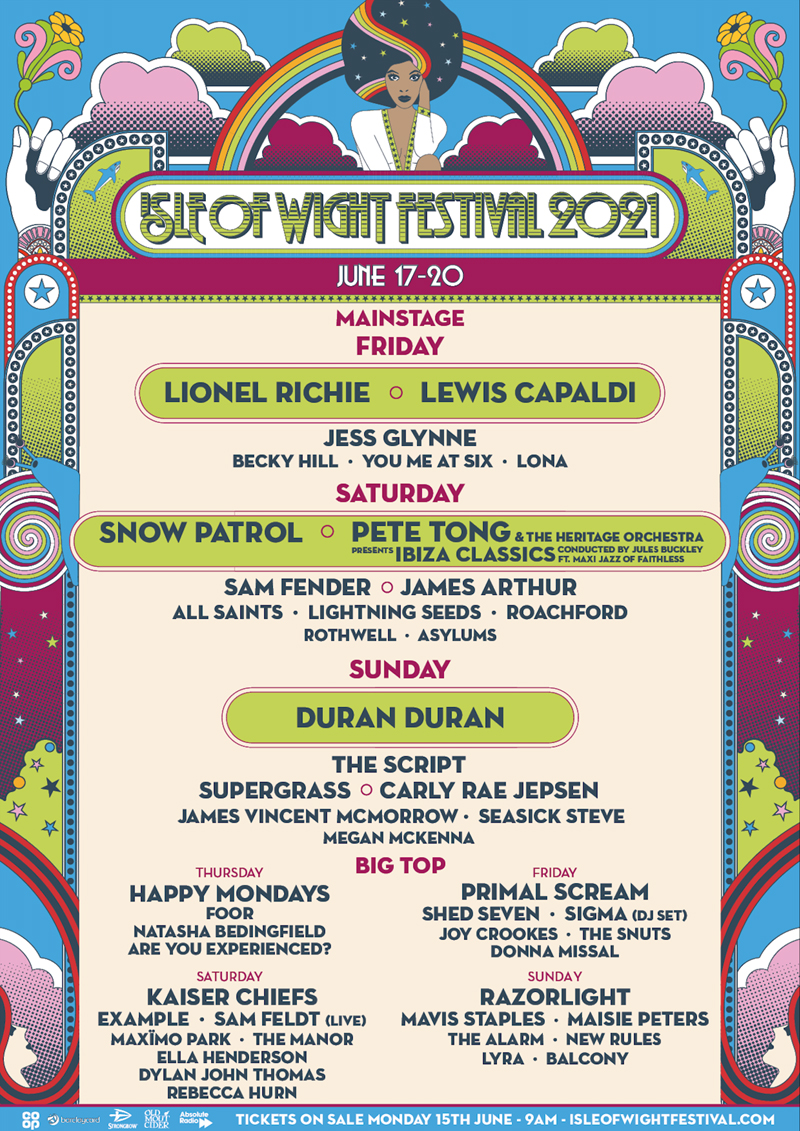 New to the bill are The Script, Jess Glynne, Carly Rae Jepsen, Mavis Staples, The Snuts and The Alarm.

Friday’s headliners both make their Isle of Wight Festival debut in 2021; international superstar Lionel Richie will co-headline the Main Stage alongside GRAMMY and BRIT Award-nominated man of the moment Lewis Capaldi.

Lionel said: I was really excited to be playing at The Isle of Wight Festival this summer and like so many of us I was very sad that so many things have had to be delayed. Obviously everyone’s health and safety comes first. I’m now looking forward to it even more and know we’ll all have such an incredible night of partying together. It’s a festival steeped in music history – Jimi Hendrix, Bob Dylan, The Rolling Stones have all headlined and I’m honoured to be joining the esteemed list! See you all next year!

Since debuting 20 years ago, Saturday co-headliners Snow Patrol have amassed over 17 million global album sales, 1 billion global track streams and countless award wins. They’re joined in headlining duties by Pete Tong who will bring the spirit of Ibiza to Seaclose Park, as he closes the Main Stage on Saturday night with his Ibiza Classics alongside the Heritage Orchestra conducted by Jules Buckley ft. Maxi Jazz of Faithless.

Snow Patrol said: Like everyone, we’re missing live music and festivals and the moment so we’re excited to get back and play The Isle of Wight Festival in 2021. We always have so much fun at this festival every time we’ve played it – see you there

Pete Tong said: Playing the 2020 Isle Of Wight Festival was definitely going to be one of the highlights of the year. Jules, The HO and the whole crew were really looking forward to it. Sadly COVID-19 has stopped that happening but absolutely thrilled that we have been invited back and that there are only 372 days to go…we are counting down!!!

Duran Duran will close the Main Stage on Sunday night. Over their illustrious four decades-long career, the British music icons have sold over 100 million records, had 18 American hit singles, 21 UK Top 20 tunes and continue to perform to huge concert audiences around the world. Their follow-up to the critically-acclaimed, Top 10 album Paper Gods (2015) will be revealed later this year and will feature collaborations with Erol Alkan, Mark Ronson, Giorgio Moroder, Graham Coxon and Lykke Li. Duran Duran will see out the 2021 event in style with a thrilling set only these purveyors of triumphant pop music can deliver.

John Taylor said: All of us in Duran Duran were disappointed by this year’s cancellations and postponements, most notably The Isle of Wight Festival. It seems to me that now more than ever, we need, as human beings, to be able to connect – sharing common space, making noise together, and celebrating both our diversity and our commonality, our passions and our collective values. I look forward to being at the festival next year with my bandmates and celebrating 40 years of music-making – and engaging in that great unifying experience that is LIVE MUSIC!

And Simon Le Bon added: We were so looking forward to playing The Isle of Wight Festival this year. You can imagine how disappointed we all were when the show got postponed – but of course it had to be that way. Now that it has been rescheduled, it’s the best bit of news I’ve had in all of these C-19 lockdown days. Isle of Wight Festival 2021, bring it on!

With 6 billion streams, 30 million single sales, 10.8 million album sales, over 12 million monthly Spotify listeners and 1.8 million ticket sales, Irish alt-pop trio The Script continue to release the inclusive, uplifting songwriting that helped them become an arena-filling band with a fervent fan base the world over.

In her first few years in the music industry, Jess Glynne has carved out a unique slot all of her own. Where others were contemplating the aftermath of heartache, she was always about standing on your own two feet. Her debut album I Cry When I Laugh is one of the defining British pop records of its era. It debuted at Number 1, spawning 12 million worldwide singles sales, 39 weeks on the UK Top 10, 2.5 billion Spotify streams, a sold out UK arena tour and garnered BRIT, MTV EMA, Ivor Novello, MOBO, Q and Glamour award nominations.

Jess said: The Isle of Wight Festival and Jess Glynne have unfinished business and both are delighted that she will be returning next year. Jess is coming back for her fans and will have a show for you that will not disappoint, so get ready!

Multi-platinum GRAMMY-nominated singer/songwriter Carly Rae Jepsen released her critically acclaimed album “E·MO·TION” in 2015 and it became “a modern touchstone for a new crop of pop-leaning artists and legacy acts,” as NPR noted. The album extended the cultural cachet that Jepsen earned from the ubiquity of her GRAMMY-nominated blockbuster hit “Call Me Maybe” (from her U.S debut album “Kiss”), which climbed to Number 1 on the iTunes singles charts in over 47 countries, sold over 20 million singles worldwide, and was certified diamond in the U.S.

Hailed by NPR as “one of America’s defining voices of freedom and peace,” Mavis Staples is the kind of once-in-a-generation artist whose impact on music and culture would be difficult to overstate. She’s both a Blues and a Rock and Roll Hall of Famer; a civil rights icon; a GRAMMY Award-winner; a chart-topping soul/gospel/R&B pioneer; and a Kennedy Center honoree. She marched with Dr. Martin Luther King, Jr., performed at John F. Kennedy’s inauguration, and sang in Barack Obama’s White House. She’s collaborated with everyone from Prince and Bob Dylan to Arcade Fire and Hozier, blown away countless festival goers from Glastonbury to Lollapalooza, and graced the airwaves on Fallon, Colbert, Ellen, Austin City Limits, Jools Holland, the GRAMMYs, and more.

With a sensational rise since the release of fan favourite “Juan Belmonte” in 2019 and an avid adoring fan base, The Snuts have been garnering a massive following in the UK. With a plethora of sold out tour dates ahead of them (pre-covid), the Scottish band will pick up in 2021 where they left off, as fans become hungry for their energetic live show once more and eagerly anticipate news about the potential release of their debut LP.

The band said: We are absolutely delighted to be joining the Isle of Wight Festival family in 2021! It will be our first time at the festival and we plan to do it in style.

The Alarm was made in Wales and debut single “Unsafe Building” featured a daring mix of amped-up acoustic guitars, harmonica and passionate vocals that invited the enduring description “Bob Dylan meets The Clash”. The sound of The Alarm has been heard around the world ever since, with 17 Top 50 UK singles, a host of successful albums and over 6 million sales worldwide. The band has had a career that has also seen founding member Mike Peters sing on stage with the likes of Bob Dylan, Neil Young, Bruce Springsteen and U2.

Tickets for The Isle of Wight Festival 2021 go on sale this Monday (15th June) at 9am www.isleofwightfestival.com/tickets