Experienced local cyclists have produced a short film revealing the scenery – and challenging gradients that await – up to 120 riders on Sunday, September 11.

Members of the Wightlink-Wight Mountain Cycle Race team know the Island’s roads well and share their insights in the film. The final stage of the Tour of Britain will start in Ryde and finish at The Needles Landmark Attraction after criss-crossing the Island for 150 kilometres (93 miles). 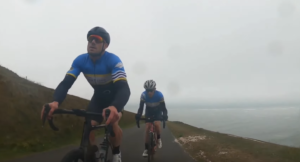 The 6-minute film also begins in Ryde and continues through Island towns and villages. The cyclists will race the final 20km along the Military Road, and will finish with a two km climb up to Tennyson Down, at an average gradient of 9.6 per cent, making it the toughest ending to any Tour of Britain in modern history.

Commentary to the film is provided by rider, Martin Sanders, who has been a member of the team since 2015; he said: “The Tour of Britain, without doubt, will be one of the most exciting cycling events to ever come to the Island. We are so excited to see some of the world’s top riders tackling the roads that we are fortunate to train on week in, week out.”

You can watch the video at bit.ly/IWO-CycleFilm.